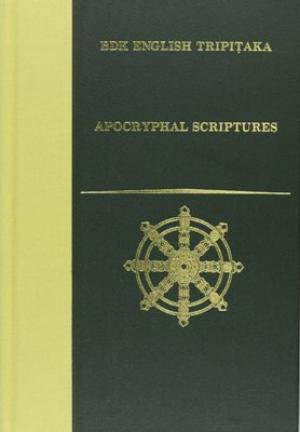 This volume contains five scriptural texts that have been especially important and influential in the East Asian Buddhist tradition: The Bequeathed Teaching Sutra, The Ullambana Sutra, The Sutra of Forty-two Sections, The Sutra of Perfect Enlightenment, and The Sutra on the Profundity of Filial Love.

The Bequeathed Teaching Sutra
This sutra, generally known as the Yui-kyo-gyo (Ch.: I-chiao-ching), contains the last teachings of Sakyamuni, delivered to the disciples assembled around his deathbed between two sal trees. In this last sermon Sakyamuni urges his disciples to strive for enlightenment through the practice of the three disciplines (precepts, meditation and wisdom), and after having expounded other concepts basic to Buddhist thought, he ends by saying that this is his last teaching. The sutra has gained considerable popularity in Japan since it is said to record the Buddha's last teachings, and it is held in especially high regard in the Zen sects.

The Ullambana Sutra
The Bon ceremony (Urabon-e) performed in Japan in memory of the dead is based upon the contents of this sutra. It relates how Maudgalyayana, one of Sakyamuni's disciples, asked Sakyamuni how he might save his mother who had fallen into the realm of hungry spirits (Skt.: preta). Maudgalyayana was instructed to make offerings of food and drink on the fifteenth day of the seventh month (the final day of the three-month retreat during the rainy season), and upon doing so his mother was relieved of her agony. The word yü-lan-p'ên in the title is said to be a transliteration of the Sanskrit word ullambana, which means 'hanging upside down,' a metaphorical reference to the suffering undergone in the realm of hungry spirits. Judging from the fact that the Bon ceremony is still performed in Japan today, one can say that this sutra has had considerable influence.

The Sutra of Forty-two Sections
This "Sutra of Forty-Two Sections" is said to be the first Buddhist scripture brought to China, but some scholars maintain that it is an apocryphal work produced in China. As the title suggests, it explains important tenets of Buddhist doctrine in 42 sections, thus serving as it were as an introduction to Buddhism. Basic Buddhist concepts such as suffering, impermanence and non-self as well as items relating to Buddhist practice, such as compassion and almsgiving, are elucidated by means of most apposite similes. Owing to the fact that it is written in very simple language, this sutra was widely read in China, and there are as many as ten variant versions of the text.

The Sutra of Perfect Enlightenment
This "Sutra of Perfect Enlightenment" takes the format of a dialogue between the Buddha and 12 bodhisattvas, starting with Mañjusri, who each puts a question to the Buddha. The central theme is the concept of 'perfect and immediate enlightenment' (yüan-tun; Jap.: endon), said to be the consummate teaching of Mahayana Buddhism. Although this sutra is said to be an apocryphal work compiled in China, it was held in high regard in Ch'an schools. However Dogen, the founder of the Soto Sect in Japan, rejected it on the grounds that it differs in con-tents from other Mahayana sutras.

The Sutra on the Profundity of Filial Love
This "Sutra on the Profundity of Parental Love" describes just how deep the love of parents for their children is, and then goes on to recommend that in order to repay this parental love one should perform the Bon ceremony (v. No. 36) and recite and copy this sutra. Judging from its unnatural format and rather laboured contents, it is generally considered that this sutra was composed in China, probably as a result of Confucian influence upon Buddhism. However, it won great popularity, being even quoted in literary works, and many commentaries were written on it

The Sutra of Forty-two Sections

The Sutra of Perfect Enlightenment

The Sutra on the Profundity of Filial Love