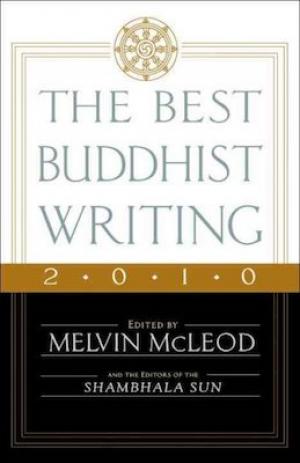 Here is this year’s installment in the series Publishers Weekly says “does a great service by highlighting views and themes as they modulate with each passing year.” The Best Buddhist Writing 2010 is an eclectic, inspiring collection of writings from the Buddhist perspective. Selected by the editors of the Shambhala Sun, North America’s leading Buddhist-inspired magazine, the essays, articles, and interviews in this anthology offer an entertaining mix of writing styles and reflect on a wide range of issues.

The Best Buddhist Writing 2010 includes:
-A question and answer session between children and Thich Nhat Hanh

-Stan Goldberg on becoming a hospice volunteer, shortly after his own diagnosis of prostate cancer

-Norman Fischer contemplates the death of his best friend

-Mary Pipher on moving past despair

PRAISE
“This excellent anthology embraces a range of issues from Buddhist perspectives, becoming a demonstration of the ongoing and powerful interrelationship between Buddhism and life in the West. According to editor McLeod, Buddhism continues to have influence beyond our awareness, but collections such as this go a long way toward enlightening us.”—Library Journal

"When I began reading mainstream Buddhist writings and familiarized myself with the prominent Buddhist teachers in the United States, I regularly bought Shambhala Sun, Tricycle, Turning Wheel, and eventually Buddhadharma. In 2004 the first of the yearly Best Buddhist Writing collection came out and I read it cover to cover. At that point I was simply grateful for the resource, and I didn’t even mind rereading the articles I had already seen in the magazines. Besides, the anthology included many book excerpts that inspired me to run out to my local bookstore.

Little has changed since then (I still have the 2004 and 2005 editions) for the Best Buddhist Writing series, except that now there are fewer excerpts from books (mostly published by Shambhala Publications) and a lot more magazine articles (primarily Shambhala Sun). Several of the same well-known teachers from the 2004 edition are in the 2010 edition: Thich Nhat Hanh, Pema Chodron, Norman Fischer, and Sakyong Mipham Rinpoche. Many more are names I recognize from the Shambhala Sun’s pages: Sylvia Boorstein, Carolyn Rose Gimian, Yongey Mingyur Rinpoche, John Tarrant, and Andrew Olendzki, to name some of the most well-known.

Frankly, I was prepared not to like much of what I was about to read. I had already worked out a title in my mind having to do with the reincarnation of old editions. For the most part, I was wrong—very wrong.

There are some wonderful, exceptional, moving essays in this collection. As is often the case, I am not moved or even stimulated any more by general teachings, although there are still a few authors I enjoy. The pieces that really grabbed me in this collection are the first-person stories, the ones where the author reveals dharma in the minutia of daily life—and does not tell us what we are supposed to learn from the tale.

The book begins with just such a story by Stan Goldberg—“Lessons for the Living”—on volunteering in a hospice shortly after beginning treatment for his own prostate cancer. The essay centers on Stan’s relationship with Jim, one of the residents. In reading about Jim, I relived some of the pain of my mother’s death from cancer, also in a hospice. And like Jim, my mother asked for ice cream.

Another early essay that touched me was “That Bird Has My Wings,” by Jarvis Jay Masters. The author is serving life in San Quentin (a maximum security prison)—it’s a sentence his supporters say is unjust. When the day does not go as Masters expects, he is opened to a whole new world, with equal parts regret and realization of impermanence. There is also a sense of seeking forgiveness, echoing the essay by Goldberg.

Daniel Asa Rose’s “Seth and Willie” is another fine essay, a short, quiet story with considerable depth—and one that reminded me of friends who are single fathers.

An exception to my (admittedly subjective) preference for first-person stories comes along with Diane Ackerman’s “Dawn Light.” She is one of our best nature writers, and an outstanding writer in general. Some writers can see beneath the surface of things and reveal new perspectives on a familiar world (thinking also of Annie Dillard or Loren Eisley)—Ackerman, as is often the case, does so in this fine essay.

In their essays, John Tarrant and Mary Pipher deal with grief and loss in different ways, but both do so with grace and determination. Both are therapists and as a result they bring a slightly different angle to their writings.

Pipher’s essay was particularly interesting because she offers a first-person subjective account of her meditation experience (she calls herself the worst Buddhist in the world in the book from which this excerpt is taken), but there is also a detached quality to it that comes from not “biting the hook,” as Pema Chodron might say.

Tarrant’s essay revolves around his father’s time in hospice and the complexity that always exists between a father and son—as well as the rhizome of family history and its interconnections. Many men never have a chance to ease into their father’s death—Tarrant was given the gift of time in which they found a space in which to meet and rest.

There are several other excellent essays of this type that I will leave for the reader to discover.

For those who enjoy less personal dharma teachings, Pema Chodron’s “Taking the Leap” offers her customary fierce gentleness, as well as a wise humility. I read the book from which this excerpt was taken, and I highly recommend the book if you enjoy this essay.

There are also good teachings from Yongey Mingyur Rinpoche (“Joyful Wsidom”), Sakyong Mipham Rinpoche (“How Will I Use This Day?”), Dzongsar Jamyang Khyentse Rinpoche (“Do Nothing”), Carolyn Rose Gimian on the late Chögyam Trungpa Rinpoche’s advice to “smile at fear,” the late John Daido Loori, Roshi (“The Way of Mountains and Rivers:), and Gaylon Ferguson (“Natural Wakefulness”), among many others.

As is often the case in an anthology, there is a little something here for almost everyone. I was pleased to have been so wrong in my initial approach to the book. I found many quality essays that will provide fodder for many future meditation sessions."