Home » Books » Bodhisattvas of the Forest and the Formation of the Mahayana: a study and translation of the Rastrapalapariprccha-sutra

Bodhisattvas of the Forest and the Formation of the Mahayana: a study and translation of the Rastrapalapariprccha-sutra 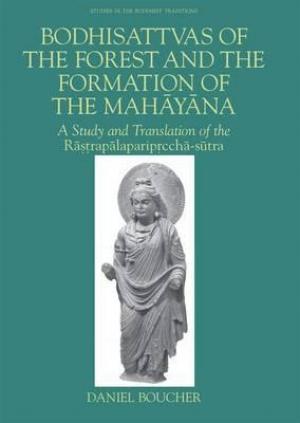 Bodhisattvas of the Forest delves into the socioreligious milieu of the authors, editors, and propagators of the Rastrapalapariprccha-sutra (Questions of Rastrapala), a Buddhist text circulating in India during the first half of the first millennium C.E. In this meticulously researched study, Daniel Boucher first reflects upon the problems that plague historians of Mahayana Buddhism, whose previous efforts to comprehend the tradition have often ignored the social dynamics that motivated some of the innovations of this new literature. Following that is a careful analysis of several motifs found in the Indian text and an examination of the value of the earliest Chinese translation for charting the sutra’s evolution.

The first part of the study looks at the relationship between the bodily glorification of the Buddha and the ascetic career—spanning thousands of lifetimes—that produced it within the socioeconomic world of early medieval Buddhist monasticism. The authors of the Rastrapala sharply criticize their monastic contemporaries for rejecting the rigorous lifestyle of the first Buddhist communities, an ideal that, for the sutra’s authors, self-consciously imitates the disciplines and sacrifices of the Buddha’s own bodhisattva career, the very career that led to his acquisition of bodily perfection. Thus, Boucher reveals the ways in which the authors of the Rastrapala authors co-opted this topos concerning the bodily perfection of the Buddha from the Mainstream tradition to subvert their co-religionists whose behavior they regarded as representing a degenerate version of that tradition.

In Part 2 Boucher focuses on the third-century Chinese translation of the sutra attributed to Dharmaraksa and traces the changes in the translation to the late tenth century. The significance of this translation, Boucher explains, is to be found in the ways it differs from all other witnesses. These differences, which are significant, almost certainly reveal an earlier shape of the sutra before later editors were inspired to alter dramatically the text’s tone and rhetoric. The early Chinese translations, though invaluable in revealing developments in the Indian milieu that led to changes in the text, present particular challenges to the interpreter. It takes an understanding of not only their abstruse idiom, but also the process by which they were rendered from an undetermined Indian language into a Chinese cultural uh_product. One of the signal contributions of this study is Boucher’s skill at identifying the traces left by the process and ability to uncover clues about the nature of the source text as well as the world of the principal recipients.

REVIEWS
"A work of scholarship on ‘early Mahayana’ the quality of which few could duplicate. Not only does [Boucher] possess the impressive linguistic skills and attention to detail necessary for such an endeavor, but he also writes and translates in a straightforward, engaging style that is enjoyable to read." —New Zealand Journal of Asian Studies (11:2, December 2009)

"This valuable book provides an excellent overview of the connections between bodhisattva monks who lived in the forest and a clearly discernible current of early Mahayana. . . . Boucher’s work represents the most up-to-date state of research on the Rastrapala and is a contribution of high relevance to the ongoing study of the emergence of Mahayana trends among groups of monks practicing forest asceticism as bodhisattvas." —H-Net Reviews, Buddhism (April 2009)

"This important study makes the Rastrapalapariprccha-sutraavailable, for the first time, in an English translation that highlights the differences between the oldest version (a third-century Chinese translation) and the much later Sanskrit version. Highly recommended for all those who are interested in the process of evolution of Mahayana scriptures over time." —Jan Nattier, International Research Institute for Advanced Buddhology, Soka University

"Kudos and bravos to Daniel Boucher are definitely in order. Other scholars have given us studies of the Buddha’s body, jataka stories, ascetic practices, and forest monks, but this study of the Rastrapalapariprccha-sutra goes beyond what others have suggested to make convincing connections between these topics and the formation (or formations) of the Mahayanamovement." —John Strong, Bates College

ABOUT THE AUTHOR
Daniel Boucher is associate professor of Sino-Indian Buddhism in the Department of Asian Studies at Cornell University.

PART I: Asceticism and the Glorification of the Buddha’s Body: The Indian Text of the Rastrapalapariprccha-sutra
Chapter One: The Physiognomy of Virtue
Chapter Two: Former Life Narratives and the Bodhisattva Career
Chapter Three: Wilderness Dwelling and the Ascetic Disciplines
Chapter Four: “Profit and Honor”: A Critique of Sedentary Monasticism

PART II: Indian Buddhism through a Chinese Lens: Dharmaraksa’s Translation of the Rastrapalapariprccha-sutra
Chapter Five: The Role of Translation in Reconstructing the
Early Mahâyâna
Chapter Six: Mistranslation and Missed Translation

PART III: An Annotated Translation of the
Rastrapalapariprccha-sûtra
One: Prologue
Two: The Story of Punyarasmi