Home » Books » Groundless Paths: The Prajnaparamita Sutras, The Ornament of Clear Realization, and Its Commentaries in the Tibetan Nyingma Tradition

Groundless Paths: The Prajnaparamita Sutras, The Ornament of Clear Realization, and Its Commentaries in the Tibetan Nyingma Tradition 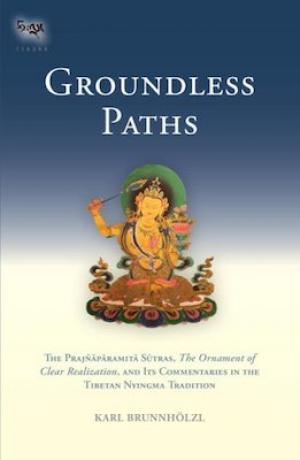 The Abhisamayalamkara summarizes all the topics in the vast body of the prajñaparamita sutras. Resembling a zip-file, it only comes to life through its Indian and Tibetan commentaries. Together, these texts not only discuss the "hidden meaning" of the prajñaparamita sutras—the paths and bhumis of sravakas, pratyekabuddhas, and bodhisattvas, but also serve as contemplative manuals for the explicit topic of these sutras—emptiness—and how it is to be understood on the progressive levels of realization of bodhisattvas. Thus, these texts describe what happens in the mind of a bodhisattva who meditates on emptiness, making it a living experience from the beginner's stage up through buddhahood.

Groundless Paths contains the first in-depth study of the Abhisamayalamkara (the text studied most extensively in higher Tibetan Buddhist education) and its commentaries from the perspective of the Nyingma School of Tibetan Buddhism. This study consists mainly of translations of Maitreya's famous text and two commentaries on it by Patrul Rinpoche. These are supplemented by three short texts on the paths and bhumis by the same author as well as extensive excerpts from commentaries by six other Nyingma masters, including Mipham Rinpoche. Thus, this book helps close a long-standing gap in the modern scholarship on the prajñaparamita sutras and the literature on paths and bhumis in mahayana Buddhism.


"Arya Maitreya's Ornament of Clear Realization, with its Indian and Tibetan commentaries, presents the complex dynamics of the path to liberation as a succession of realizations of the empty nature of all phenomena. This presentation is a powerful antidote to whatever two-dimensional views we might hold about spiritual experience and the journey to enlightenment.

"Groundless Paths completes Karl Brunnhölzl's brilliant three-volume study of Tibetan commentaries on the Ornament of Clear Realization. In this volume, the great nineteenth-century master Patrul Rinpoche adds a Nyingma perspective to the Kagyü viewpoints found in Gone Beyond. Altogether, this collection is a marvelous resource for scholars and practitioners who wish to understand the depth and breadth of the Buddhist path."
—Andy Karr, author of Contemplating Reality

"Groundless Paths contains Dza Patrul Rinpoche's brilliant commentaries on the Abhisamayalamkara, masterfully translated and annotated by Karl Brunnhölzl. This third volume completes the presentation of the major Kagyü and Nyingma works on the prajñaparamita literature in English for the first time."
—Elizabeth Callahan, translator of The Treasury of Knowledge, Book Six, Part Three: Frameworks of Buddhist Philosophy

ABOUT THE AUTHOR
Karl Brunnhölzl was trained as a physician and presently works as a Tibetan translator and Buddhist teacher. He studied Tibetology, Buddhology, and Sanskrit at Hamburg University and Tibetan language and Buddhist philosophy and practice at the Marpa Institute for Translators in Kathmandu. Currently he works as a translator and interpreter for the Tsadra Foundation, Nalandabodhi, and the Nitartha Institute. In 2009 he was appointed as the first Western khenpo (abbot, in the Kagyü and Nyingma lineages) by Dzogchen Ponlop Rinpoche. He is the author and translator of The Center of the Sunlit Sky (2004), the first in-depth study of the Kagyü interpretation of Madhyamaka in a Western language; Straight from the Heart (2007), an anthology of Buddhist pith instructions; Nagarjuna's In Praise of Dharmadhatu (2007) with commentary by the Third Karmapa; Luminous Heart (2009), the Third Karmapa on buddha nature, consciousness, and wisdom; and Gone Beyond, vols. 1 and 2 (2010-2011).