Home » Books » At Hell's Gate: a soldier's journey from war to peace

At Hell's Gate: a soldier's journey from war to peace 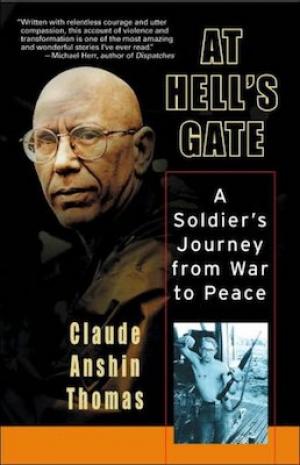 In this raw and moving memoir, Claude Thomas tells the dramatic story of his service in Vietnam, his subsequent emotional collapse, and how he was ultimately able to find healing and peace. Thomas went to Vietnam at the age of eighteen, where he served as a crew chief on assault helicopters. By the end of his tour, he had been awarded numerous medals, including the Purple Heart. He had also killed many people, witnessed horrifying cruelty, and narrowly escaped death on a number of occasions.

When Thomas returned home he found that he continued to live in a state of war. He was overwhelmed by feelings of guilt, fear, anger, and despair, all of which were intensified by the rejection he experienced as a Vietnam veteran. For years, Thomas struggled with post-traumatic stress, drug and alcohol addiction, isolation, and even homelessness.

A turning point came when he attended a meditation retreat for Vietnam veterans led by the renowned Zen monk Thich Nhat Hanh. Here he encountered the Buddhist teachings on meditation and mindfulness, which helped him to stop running from his past and instead confront the pain of his war experiences directly and compassionately. Thomas was eventually ordained as a Zen monk and teacher, and he began making pilgrimages to promote peace and nonviolence in war-scarred places around the world including Bosnia, Auschwitz, Afghanistan, Vietnam, and the Middle East.

At Hell's Gate is Thomas's dramatic coming-of-age story and a spiritual travelogue from the horrors of combat to discovering a spiritual approach to healing violence and ending war from the inside out. In simple and direct language, Thomas shares timeless teachings on healing emotional suffering and offers us practical guidance in using mindfulness and compassion to transform our lives.

REVIEWS
"This is a book of great power. Thomas's story has the power to heal, to inspire, to teach."
—John Laurence, former CBS News correspondent and author of The Cat from Hue: A Vietnam War Story

"A powerful, wise, and genuinely profound spiritual odyssey from the insanity of violence (in the world, within ourselves, and in the assumptions of American culture) to the peace and compassion of mindfulness practice. Thomas beautifully models Zen teachings in his daily life, and by doing so he enlightens and liberates us all."
—Charles Johnson, winner of the National Book Award for Middle Passage

"Claude Anshin Thomas has been an inspiration to me. Our world urgently needs to listen to him tell of his life in war and then in peace."
—Maxine Hong Kingston, author of The Woman Warrior

"In these strange times, when fear and aggression often seem to be the only responses we can imagine to a perceived threat, this powerful book provides an honest, open-hearted, and very moving testimony to the power of Buddhist practice to break this cycle. Thomas is a hero in the truest sense of the word: having undergone an epic trial, he has generously come back to help others in need."
—George Saunders, author of Pastoralia and CivilWarLand in Bad Decline

"Thomas's journey from the killing fields of Vietnam to the path of peace and pilgrimage testifies to his—and our—powerful urge to awaken. At the same time, this is not a pretty story. Anshin Thomas has lived in hell, knows its smell and taste, and continues to confront it every day of his life. Yet he remains undeterred in his work to make peace in himself and the world at large."
—Bernie Glassman, author of Instructions to the Cook and Bearing Witness