Home » Books » I Give You My Life: an autobiography of a western buddhist nun

I Give You My Life: an autobiography of a western buddhist nun 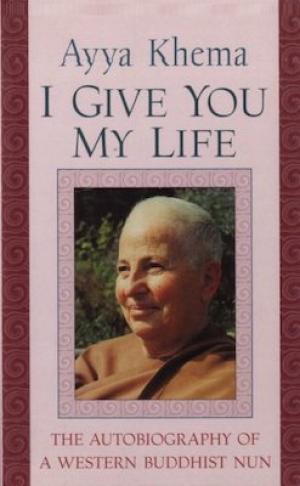 Ayya Khema (1923-1997) was the first Western woman to become a Theravadan Buddhist nun. As such, she has served as a model and inspiration for women from all the Buddhist traditions who have sought to revive the practice of women's monasticism in modern times. Though her renown as a teacher is widespread, few know the truly amazing details of her life before her monastic ordination at the age of fifty-eight.

And what a life it was. Born Ilse Kussel in Berlin, Germany, she grew up in a prosperous Jewish family that was broken up by Nazi terror in 1938. The story of her escape alone to Scotland, and her journey to rejoin her family in China, would be enough for a thrilling adventure novel in itself—but it is only the beginning of the story. Her later adventures included—but were not limited to—surviving the Japanese invasion of China; living the life of a suburban housewife in Los Angeles, California; journeying up the Amazon; studying in a Bolivian university; building a power plant in Pakistan; and establishing the first organic farm in Australia. Her Buddhist practice was a result of a pursuit of the spiritual life that began in her forties when she encountered spiritual teachers in India. She eventually founded a monastery in Sri Lanka, from where, through her books and her teaching travels, she became one of the most widely respected of contemporary teachers, particularly skilled in interpreting the Buddhist teachings for her fellow Westerners.

"A Buddhist autobiography seems an anomaly, but this story of the first Western woman to become an ordained Theravadin Buddhist nun sweeps the reader away from all preconceptions and proves an engaging read. Ilse Kussel was born to an affluent Jewish family in Berlin that lost everything in the Holocaust. After rootless wandering, she ended up in Los Angeles, a suburban housewife with two children, but the suburban life seemed hollow. She divorced her husband, remarried, and began a rugged world journey that lasted the rest of her life.

"Halfway through the autobiography, Kussel's tale turns from the outer to the inner journey. Through her travels she sees that people everywhere suffer loss and fail to find enduring happiness. And having along the way attempted to understand the various religions she encounters, Kussel came to realize that she had been journeying along a Buddhist path and began a committed practice of Theravadin Buddhism, becoming the ordained nun Ayya Khema. The remainder of her tale as a teacher and founder of abbeys for nuns is every bit as engaging. Finally, at the end, her life comes full circle as she returns to Germany to found the Buddha-Haus in Munich.

"The first chapter is a fine piece of Buddhist writing, merging the beginning and the end, the outer and the inner world, and divesting an extremely interesting story of all ego. Ayya Khema acknowledges the unusual act of writing an autobiography. After a life of change, farewell, and letting go, it might seem an attempt to hold on, to perpetuate. But the reader understands that Ayya Khema has just as lightly let go of all those details that had been her life. This very literally titled work, itself a final act of detachment—finished just before her death in 1997—is a model for the reader of the essential Buddhist act of letting go."
—Richard Yutso, MultiCultural Review.