Magician of Lhasa: a novice monk, a quantum scientist, an ancient secret 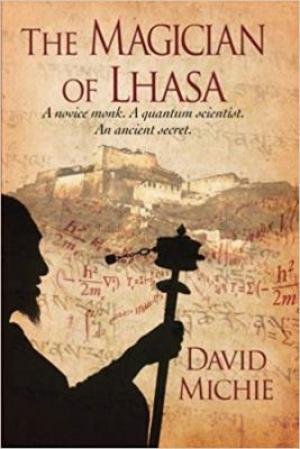 When novice monk Tenzin Dorje is told by his lama that the Red Army is invading Tibet, his country’s darkest moment paradoxically gives him a sense of purpose like no other. He accepts a mission to carry two ancient, secret texts across the Himalayas to safety. Half a century later, in a paradox of similarly troubling circumstances, Matt Lester is called upon to convey his own particular wisdom as a scientist, when Matt’s nanotech project is mysteriously moved from London to a research incubator in Los Angeles.

Tenzin and Matt embark on parallel adventures which have spine-chilling connections. Tenzin’s perilous journey through the Himalayas, amid increasing physical hardship and the ever-present horror of Red Army capture, is mirrored by Matt’s contemporary, but no less traumatic challenges, as his passionate relationship with his fiancée, Isabella, and his high flying career undergo escalating crises. It is at the moment when both Tenzin and Matt face catastrophe that their stories converge, spectacularly transforming our understanding of all that has gone before.

REVIEWS
"The Magician of Lhasa is simply magical - I was lost in its two worlds from start to finish. David Michie interweaves his plotlines elegantly, and keeps his readers enthralled by his masterful, captivating storytelling. VERY enjoyable book! Thanks!"
—John Kovalic, Cartoonist and Creator of Dork Tower

“A novel of ideas paced like a thriller, with heart. The Magician of Lhasa will take you to places you hadn't even suspected, and you won't want to leave."
—Stephen Graham Jones, CU Professor of English and author of Demon Theory

"The Magician of Lhasa is a delightful page turner with suspense woven into every chapter. It is also an upbeat read, one that, for a change, leaves you with a sense of sincere hope for the human condition.”
—Dennis Drogseth, critic and author of Criminal Justice

“Like all good works of geek fiction, The Magician of Lhasa is not a book to be forgotten once finished…. I want to learn more! Geek fiction WIN!”
—E.L. Fay, author of This Book and I Could Be Friends Read the entire review here.

“Fanciful caves, scary adventures, and a creepy plot are all mixed up with deep truths about human existence and the nature of mind. A terrific read…. How rare to get an exciting story and be made to think deeply about the meaning of life.”
—Dr. Susan Blackmore, psychologist, university professor and author Read the entire review here.

"It is as good as any Dan Brown novel and I'd say is actually better than Brown's current book, The Lost Symbol. I give The Magician of Lhasa a 9 out of 10 stars — 10 being best."
—James Ure, author of The Buddhist Blog Read the entire review here.

"I just finished reading The Magician of Lhasa and I have to say it was one of the most exciting books I have read in many years. I hope the story doesn't end here! Is there going to be a sequel and a movie? Thank you so very much for writing this book. It will stay with me for a long, long time."
—Bonnie Ruiter

"Don’t start this book before bedtime—you just might be up all night. Michie ruthlessly leaves the reader on cutting edge cliff-hangers (some quite literally) as The Magician of Lhasa alternates between two very different worlds. The Tibetan refugees, willing to die if need be to accomplish their mission, come alive for the reader as they battle hunger, thirst, doubt, and the Red Army. So too, does the contemporary scientist take on the reality of an acquaintance, with all the difficulties and questions familiar to anyone that has grappled with great questions of life and death in the fractured modern world."
—Ted Biringer, author of The Flatbed Sutra of Louie Wing Read the entire review here.

"I read a fun book over the holidays. This is David Michie's The Magician of Lhasa.... Billed as the first ever thriller based on Tibetan Buddhism, its subtitle is A novice monk. A quantum scientist. An ancient secret.. It certainly lives up to the description. I found it exciting, sometimes scary, and a lot of fun."
—Psychology Today

"I just finished reading David Michie's The Magician of Lhasa. I write this review, bleary-eyed from reading through the night. This thriller is a unique combination of hard science and deep spirituality wrapped in a well-written thriller that seems to turn the page for you, refusing to let you put it down. Bravo, Mr. Michie! I need to sleep now."
—Norman LaFave