Home » Books » Mining for Wisdom within Delusion: Maitreya's distinction between phenomena and the nature of phenomena and its Indian and Tibetan commentaries

Mining for Wisdom within Delusion: Maitreya's distinction between phenomena and the nature of phenomena and its Indian and Tibetan commentaries 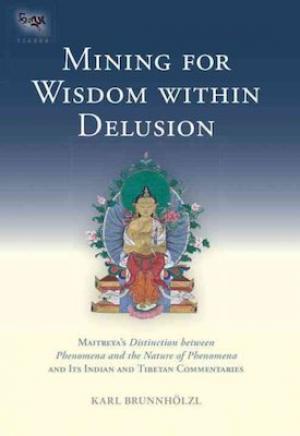 Maitreya's Distinction between Phenomena and the Nature of Phenomena distinguishes the illusory phenomenal world of sa?sara produced by the confused dualistic mind from the ultimate reality that is mind's true nature. The transition from the one to the other is the process of "mining for wisdom within delusion." Maitreya's text calls this "the fundamental change," which refers to the vanishing of delusive appearances through practicing the path, thus revealing the underlying changeless nature of these appearances. In this context, the main part of the text consists of the most detailed explanation of nonconceptual wisdom—the primary driving force of the path as well as its ultimate result—in Buddhist literature.

The introduction of the book discusses these two topics (fundamental change and nonconceptual wisdom) at length and shows how they are treated in a number of other Buddhist scriptures. The three translated commentaries, by Vasubandhu, the Third Karmapa, Rangjung Dorje, and Gö Lotsawa, as well as excerpts from all other available commentaries on Maitreya's text, put it in the larger context of the Indian Yogacara School and further clarify its main themes. They also show how this text is not a mere scholarly document, but an essential foundation for practicing both the sutrayana and the vajrayana and thus making what it describes a living experience. The book also discusses the remaining four of the five works of Maitreya, their transmission from India to Tibet, and various views about them in the Tibetan tradition.

PRAISE
"Mining for Wisdom within Delusion provides us with a much-needed comprehensive treatment of Maitreya's text, something that both scholars and meditators will find illuminating. Karl Brunnhölzl's adept translation, annotations, and introduction add layers of richness that always bring us back to the basic point: wisdom is discovered within delusion."
—Elizabeth Callahan, translator of The Treasury of Knowledge, Book Six, Part Three: Frameworks of Buddhist Philosophy

"Once again Tsadra and Karl Brunnhölzl have given us access to a classic of Buddhist Mahayana, so important in recognizing the true nature of reality. This classic will guide the scholar and the practitioner alike in discovering the nonconceptual wisdom within delusion. This is a monumental work."
—Judith Simmer-Brown, Ph.D., Professor of Religious Studies, Naropa University

"While scholars will delight in this rich banquet of information, all practitioners who wonder how it works that their meditation bears fruit as the dawning of 'nonconceptual wisdom,' what it actually is that undergoes the 'fundamental change,' and how that process unfolds will definitely find overwhelming insight in this book."
—Susanne Schefczyk, translator and editor of Everyday Consciousness and Primordial Awareness

"There is no doubt that everything a scholar or a practitioner needs to know on this subject is here, and that Karl Brunnhölzl is the reigning expert and right person to have written it. If anything at all was left out, we don't need to know it."
—Sarah Harding, translator of Machik's Complete Explanation