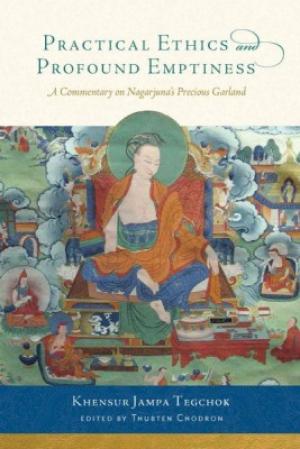 Let a great Tibetan scholar guide you through one of Nagarjuna's masterworks.

In Practical Ethics and Profound Emptiness Khensur Jampa Tegchok walks us carefully through a classic of Indian Buddhist philosophy, explaining the implications of its philosophical arguments and grounding its advice in a recognizable day-to-day world. In Precious Garland, the source text for this commentary, Nagarjuna advises his patron king on how best to take advantage of human life to secure a happy rebirth in the next life while making progress toward the goal of enlightenment. Known primarily for his incisive presentation of emptiness, here Nagarjuna shows his wise understanding of how to navigate the intricacies of worldly life to balance everyday needs with spiritual practice. Loaded with equal measures of penetrating explanations of the highest reality and inspiring encouragement towards the bodhisattva practices, Practical Ethics and Profound Emptiness makes the case for living a thoughtful, morally upright life in the world to achieve immediate and ultimate spiritual goals.

Born in 1930, Khensur Jampa Tegchok became a monk at the age of eight. He studied major Buddhist treatises at Sera Monastic University in Tibet for fourteen years before fleeing his homeland in 1959. The former abbot of the Jé College of Sera Monastic University in India, he was also a beloved teacher at several FPMT centers including the Masters Program at Instituto Lama Tsongkhapa in Italy, Land of Medicine Buddha in California, and Nalanda Monastery in France. He passed away in 2014.

Bhikshuni Thubten Chodron has practiced the Buddha's teachings for more than thirty-five years. A native of Los Angeles, she ordained as a nun in the Tibetan tradition in 1977 and received the full ordination of a bhikshuni in Taiwan in 1986. Venerable Chodron has studied extensively with His Holiness the Dalai Lama, Tsenzhap Serkhong Rinpoche, Zopa Rinpoche, and Lama Thubten Yeshe among many other Tibetan masters. With a clear, practical, and humorous style, she teaches Buddhist philosophy and meditation worldwide. Her numerous books, published in several languages, include Buddhism: One Teacher, Many Traditions, Buddhism for Beginners, Taming the Mind, and Don't Believe Everything You Think. Venerable Chodron has been the resident teacher at Amitabha Buddhist Centre in Singapore and was the resident teacher and spiritual adviser for Dharma Friendship Foundation in Seattle for ten years. She is currently the abbess of Sravasti Abbey, a Buddhist monastic community in Newport, Washington, which she founded in 2003.