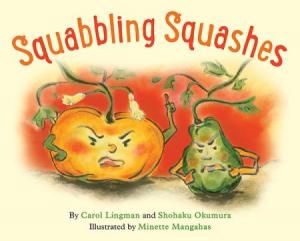 Squabbling Squashes is a story for children of all ages about interconnection and learning to live in harmony amid differences, from a leading light of contemporary Zen—based on a parable from Kosho Uchiyama’s classic bestseller Opening the Hand of Thought.

“Super enjoyable to hear, read, and savor for people of all ages, Squabbling Squashes helps our future generations to be aware of a universal mutual tie in society and nature.”
—Kazuaki Tanahashi, author of Painting Peace: Art in a Time of Global Crisis

ABOUT THE AUTHORS
Carol Lingman is a Zen practitioner and retired editor, living in Sonoma County, California, where she practices East Asian calligraphy and the Feldenkrais Method. She has written and edited many educational, environmental, and movement studies publications for adults. This is her first children’s book.

Shohaku Okumura is a Soto Zen priest and Dharma successor of Kosho Uchiyama Roshi. He is a graduate of Komazawa University and has practiced in Japan at Antaiji, Zuioji, and the Kyoto Soto Zen Center, and in Massachusetts at the Pioneer Valley Zendo. He is the former director of the Soto Zen Buddhism International Center in San Francisco. His previously published books of translation include Shobogenzo Zuimonki, Dogen Zen, Zen Teachings of Homeless Kodo, and Opening the Hand of Thought. Okumura is also editor of Dogen Zen and Its Relevance for Our Time; and SotoZen. He is the founding teacher of the Sanshin Zen Community, based in Bloomington, Indiana, where he lives with his family.

Minette Mangahas is an artist and designer whose calligraphy-inspired work has been featured internationally. When not illustrating squashes in Squabbling Squashes, she’s eating them.