Tibet: through the red box 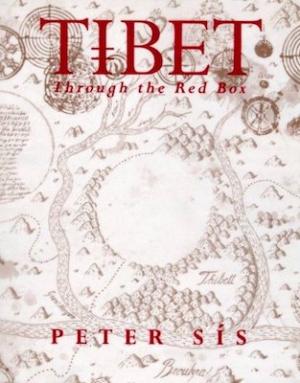 A father's diary, an artist's memoir.

By the author of the best-selling Three Golden Keys.

While my father was in China and Tibet, he kept a diary, which was later locked in a red box. We weren't allowed to touch the box. The stories I heard as a little boy faded to a hazy dream, and my drawings from that time make no sense. I cannot decipher them. It was not until I myself had gone far, far away and received the message from my father that I became interested in the red box again . . .

In New York, Peter Ss receives a letter from his father. "The Red Box is now yours," it says. The brief note worries him and pulls him back to Prague, where the contents of the red box explain the mystery of his father's long absence during the 1950s.

Czechoslovakia was behind the iron curtain; Vladimir Ss, a documentary filmmaker of considerable talent, was drafted into the army and sent to China to teach filmmaking. He left his wife, daughter, and young son, Peter, thinking he would be home for Christmas. Two Christmases would pass before he was heard from again: Vladimir Ss was lost in Tibet. He met with the Dalai Lama; he witnessed China's invasion of Tibet. When he returned to Prague, he dared not talk to his friends about all he had seen and experienced. But over and over again he told Peter about his Tibetan adventures. Weaving their two stories together - that of the father lost in Tibet and that of the small boy in Prague, lost without his father - Ss draws from his father's diary and from his own recollections of his father's incredible tales to reach a spiritual homecoming between father and son. With his sublime pictures, inspired by Tibetan Buddhist art and linking history to memory, Peter Ss gives us an extraordinary book - a work of singular artistry and rare imagination.

ABOUT THE AUTHOR
Peter Sís is an internationally acclaimed author, illustrator, and filmmaker. He was born in Brno, Czechoslovakia, and studied painting and filmmaking at the Academy of Applied Arts in Prague, and at the Royal College of Art in London. His most recent book, Starry Messenger: Galileo Galilei, was the winner of a Caldecott Honor citation, and his illustrations often appear in The New York Times Book Review. He lives in New York City.

PRAISE
"When Sis opens the red lacquered box that has sat on his father's dresser for decades he finds the diary his father kept when he was lost in Tibet in the mid 1950s...As the story of the elder S°s's journey into the heart of Tibet unfolds...S°s begins to come to terms with what the loss of his father for that time meant to him, then and always."
-Booklist