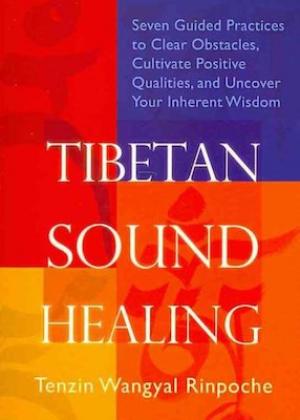 "It is my sincere desire that this simple and elegant practice of the Five Warrior Syllables, which is based on the highest teachings of the Tibetan Bön Buddhist tradition of which I am a lineage holder, will benefit many beings in the West. Please receive it with my blessing, and bring it into your life. Let it support you to become kind and strong and clear and awake." —Tenzin Wangyal Rinpoche

One of the world's oldest unbroken spiritual traditions is the Bön Buddhist tradition of Tibet. This wisdom path has survived, thanks to the efforts of a handful of dedicated lamas such as Bön lineage holder Tenzin Wangyal Rinpoche. Now, with Tibetan Sound Healing, you can connect to the ancient sacred sounds of the Bön practice—and through them, activate the healing potential of your natural mind.

The Bön healing tradition invokes the Five Warrior Syllables—"seed" sounds that bring us to the essential nature of mind and release the boundless creativity and positive qualities that are fundamental to it. Through the medicine of sound, you can clear obstacles of your body, your energy and emotions, and the subtle sacred dimensions of your being. In this integrated book-and-CD learning program, Tenzin Wangyal Rinpoche gives you the tools to access wisdom and compassion and use the vibration of sacred sound to cultivate the healing power within your body's subtle channels.

The spiritual heritage of the Bön is rich with methods to guide all beings on the path to liberation. With Tibetan Sound Healing, you are invited to learn from a master of this ancient lineage—and discover the power of sacred sound to purify your body, connect with your inherent perfection and completeness, and awaken spiritual virtue.

"I was attracted to this book principally because of the title. I like chanting and have a daily liturgy practice, and my sympathy with this kind of approach comes from my devotion to the Medicine Buddha and the many years during which I worked as a spiritual healer. So I began this review in a state of optimism which was rapidly followed by finding myself confronted with the demon of deep cynicism.

Tenzin Wangyal who is based in the US, is a well-respected Rinpoche in the Tibetan Bön tradition and he is probably best known for his volume on dream yoga. The central teaching in the Bön religion is that of dzogchen and this informs the approach that Tenzin takes in this work.

This is a slim and simply set-out volume with an accompanying CD and it focuses on the meditative chanting of the 'Five Warrior Syllables'.

Tenzin writes a lucid introduction in which he outlines the principal aim of the practice, which is to spontaneously awaken positive emotion through the chanting of the Warrior Seed Syllables (take note Buddhists, you will find the Om and Ah inverted in the Bön tradition). By positive emotion is meant the Four Immeasurables, or Brahma Viharas, common to both the Bön as well as all Buddhist traditions.

Each Warrior Syllable has a corresponding colour, light, and chakra or energy centre, which is usually visualised as a 'wheel'. This is the five chakra system of Crown/Forehead, Throat, Heart, Navel and Secret (genitals).

Tenzin recommends particular postures and various breathing exercises known as the Five Tsa Lung Exercises, which are outlined at the end of the book, and although the information is clear, this section would have benefited from illustrations.

Tenzin's view is that when chanting mantras or seed syllables the sound is not so important as what he calls the 'essence' of that sound which remains with us. He then loses me as a reader by stating that when making the sound '…we are relating to the breath and vibration of the sound itself.' The term 'vibration' reminds me of my days spent in the Healing Development Group where we used a similar but Hindu version of the chakras and seed syllables and where 'vibration' of the sound was all important. I personally found it enjoyable but rather vague and 'woolly'.

The practice itself begins with the syllable 'A'. Tenzin addresses the realm of 'space' from that which surrounds us to that which 'is' us and as the

… ground within which all the other elements play…it is changeless….primordially pure…the wisdom body of all the Buddhas, the dimension of truth, or dharmakaya.

And it is from this base — that is 'A' — that the other seed syllables of Om, Hung, Ram and Dza emerge.

Tenzin tells us that one outcome of chanting the seed syllable 'A' will be that deep inside we will experience an openness. At the same time he asks us to visualize white light emanating from the chakras at the crown and forehead. As we open to this experience Tenzin suggests that our mental obscurations will be released and so we will continue to open and experience 'space'.

This all sounds apparently very simple and very appealing.

Tenzin's approach is very rooted in the tradition of dzogchen which is found in both the Bön religion and the Nyingma school of Tibetan Buddhism. In terms of meditation this involves an opening to experience and a transformation of the 'self' to the point where one is no longer attached to the 'self'. This will be for some readers quite different from the perhaps more familiar way of making effort and of working in meditation.

I may sound cynical here but while there is a part of me that enjoys chanting and enjoys visualizing light pouring from my chakras I do not expect this to lead to an experience of 'awakening' just yet. I think that you would have to be pretty far along the spiritual path for any 'whizz-bang' experience to take place.

However, through engaging with the Five Warrior Seed Syllables over a ten-day period my lung capacity increased, which as an asthmatic was a real joy. I was able to engage the sound with the appropriate chakra, and had a strong sense of energy and light moving in the chakras.

I would provisionally recommend this book. Enjoy it for the chanting, breath and visualization of the chakras and light, enjoy listening to Tenzin (who has a nice voice) and you may well feel very moved by the concluding verses on the CD which are dedicated to his teacher.

If you are able to cultivate the four immeasurables (brahma viharas) through a regular practice of the Five Warrior Syllables well you are indeed fortunate. For most of us that is a slow process, of gradual change leading to the transformation of our negative mental states into ones that are positive. Then we can begin to experience the beauty that is the vastness and wonder of 'space'."