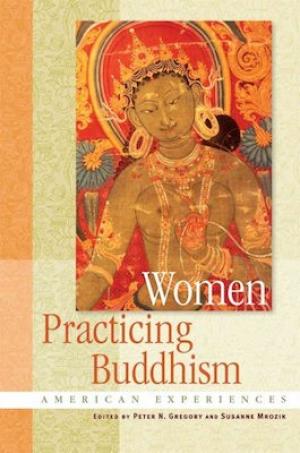 Individually and collectively, today’s female practitioners are changing the face of Buddhism today, as surely as Buddhist practice is transforming each one of their lives.
In Women Practicing Buddhism, you'll meet a diverse sampling of contemporary Buddhist women, from those who are crucial to the community's organizational fabric to others who infuse their art and activism with the Dharma.

Women Practicing Buddhism is a kind of mosaic portrait of the Buddhist women's movement, revealing some of the many ways that the Dharma returns the embrace of those women who are coming to it and making it their own.

REVIEWS
"High profile Buddhist women appear in this collection of thoughtful essays and conversations gleaned from a conference of the same name at Smith College in 2005. This accessible, clear-eyed book is a testament to how Buddhist teachings can pave the way to both social and personal liberation. Among the topics under discussion are he ordination of women, unexamined racist conditioning in predominantly white sanghas, and how women can approach patriarchal religions on their own terms."
—Tricycle magazine

“This book enables us to eavesdrop on the thoughts and conversation of women practitioners who also happen to be artists, scholars, activists, and mothers. It's fascinating to read their contemplations of race, gender, creativity, and social issues. That such a dialog is even taking place is cause for celebration.”
—Susan Piver, author of How Not to Be Afraid of Your Own Life

"Highlights include essays by Susanne Mrozik and Karma Lekshe Tsomo examining the domestic and international contexts in which a new type of Buddhist woman-the American Buddhist-practices. Bell hooks' salient 'Moving Beyond Gender' is an appreciation of Buddhism's essential gender neutrality and of the role that American Buddhist women have played in critiquing Buddhism's patriarchal institutions. Other essays reflect on creativity, activism, and issues of race, class and ethnicity. This book reveals the diversity of women practicing Buddhism in America, the keenness of their practice, and the depth of their reflections."
—Shambhala Sun magazine

"We are witnessing an exciting moment in history—the confluence of ancient Buddhist teachings and egalitarian American values. This encounter has brought forward articulate and creative women who have developed profound wisdom through Buddhist practices. Women Practicing Buddhism offers a thought-provoking glimpse into the impact of gender, identity, sexuality, discipline, power, and freedom for American women who practice Buddhism."
—Shaila Catherine, guiding teacher, Insight Meditation South Bay, and author of the forthcoming Focused and Fearless: A Meditator's Guide to States of Deep Joy, Calm, and Clarity

"Contributors include artists, activists, authors, nuns, and teachers, such as Meredith Monk, Jane Hirshfield, bell hooks, Thubten Chodron, Karma Lekshe Tsomo, and Carol Wilson. Some address heavy issues; others look at how their Buddhist practice informs their art or writing. The end result is a slightly eclectic, informative look at the lives of a diverse group of women practicing Buddhism in America and the various lessons to be learned from their experiences."
—Buddhadharma magazine


About the Editors:
PETER N. GREGORY is the Jill Kerr Conway professor of religion and East Asian studies at Smith College. He lives in Northhampton, MA.

SUSANNE MROZIK is an assistant professor in the religion department of Mount Holyoke College. She lives in western Massachusetts.