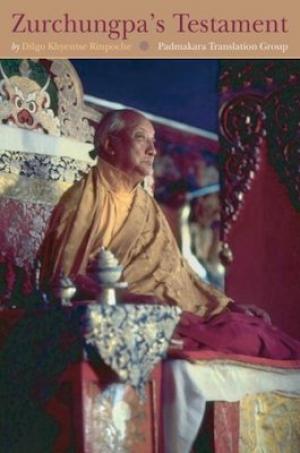 Zurchungpa's Eighty Chapters of Personal Advice was the final teaching given by the great Nyingma master Zurchung Sherab Trakpa before he passed away. His counsels are the distillation of a lifetime's experience and comprise the practical instructions of a master who had made the teachings of the Great Perfection truly part of himself. The original text consists of almost 580 maxims organized into eighty chapters covering the entire path of Dzogchen, from fundamental teachings on devotion and renunciation through to a whole series of pith instructions that bring the Dzogchen view to life. Much of the meaning of these pithy, often cryptic instructions could be lost on the reader without the help of the notes Shechen Gyaltsap Rinpoche provided in his annotated edition, which he based on the explanations he received from his own teacher, Jamyang Khyentse Wangpo.

This book contains a complete, detailed teaching on Zurchungpa's text by Dilgo Khyentse Rinpoche, based on Shechen Gyaltsap's notes. Originally intended as essential instructions for a group of practitioners in three-year retreat, it will undoubtedly serve as an indispensable guide to anyone who seriously wishes to practice the Great Perfection.

ABOUT THE AUTHORS
Dilgo Khyentse Rinpoche (1910-1991) was one of the foremost lamas to come out of Tibet and was revered for his wisdom and compassion by members of all schools of Tibetan Buddhism. He was untiring in preserving and propagating the Dharma, through the publication of important Buddhist works (including twenty-five volumes of his own writings), the building of monasteries and stupas, and transmissions and instructions to countless practitioners. He made several visits to the West, where he had a large number of disciples.

Zurchung Sherab Trakpa (1014-1074) was a key teacher in the Zur tradition, one of the handful of kama lineages through which the teachings of the Ancient Tradition were transmitted from master to disciple, beginning with Guru Padmasambhava and Vimalamitra right down to the Nyingma masters of the present day. He was a learned scholar and accomplished meditation master who spent many years in retreat practicing the teachings of the Great Perfection.

Shechen Gyaltsap Rinpoche (1871-1926) was an important disciple of Jamyang Khyentse Wangpo the Great and one of Dilgo Khyentse Rinpoche's root teachers. An accomplished meditator, he was also one of the most respected scholars of his day, whose writings fill thirteen volumes.

The Padmakara Translation Group has a distinguished reputation for its translations of Tibetan texts and teachings, and is renowned for its clear and accurate literary style.

PRAISE
"Among the senior Tibetan teachers in our generation, it is well known that Dilgo Khyentse Rinpoche's commentaries are not merely scholarly explanations but interpretations coming directly from the depth of his own personal experience. This wonderful text by Zurchungpa is further enriched by his remarkable commentary."
—Shechen Rabjam Rinpoche

"When I think of Zurchungpa, for his great scholarship, years of practice in solitary retreats and for his great wisdom, compassion and charisma to lead countless students of all levels, my mind naturally goes to Dilgo Khentse Rinpoche. He must have been someone like him. This book enshrines the living experience and heart of two truly realized masters translated by people who not only understand but also practice the teachings."
—Ringu Tulku

"An extraordinary guide to authentic spiritual practice combining the wisdom of three of the greatest masters of the Tibetan tradition."
—Matthieu Ricard

"In the early history of Nyingmapa, the great secret, ancient translation tradition of Tibetan Buddhism, the entirety of the vajrayana cascaded through three tiers of lineage holders. The first is associated with the translator gNyags Jnanakumara; the second, with gNubs Sangs-rgyas Yeshe Rinpoche; and the last with the two Zur masters, Shakya 'Byung-gnas and Shes-rab Grags. The consummate master, Zur-chung Shes-rab Grags, upheld the entire Nyingma tradition which, without interruption, has been transmitted to the present day. How wonderful it is that his exposition dating from the eleventh century—combined with the wisdom and blessing of the great twentieth century dzogchen master, Dilgo Khyentse Rinpoche—is burgeoning in this new millennium."
—Khenchen Palden Sherab Rinpoche

DILGO KHYENTSE RINPOCHE'S COMMENTARY ON THE EIGHTY CHAPTERS OF PERSONAL ADVICE
Introduction
Title; homage; different teachings to match different capacities; Deshek Gyawopa; the Tibetan translators; the defects of samsara; the importance of Zurchungpa's advice; a summary of the five sections

I FAITH
1 Six faults in not having faith
Definition of Dharma; faith; faults of not having faith
2 Six virtues of faith
Advantages of having faith - the story of Lilavajra
3 Ten causes that give rise to faith
One's present life and circle of friends; the karmic law of cause of effect - Ravi and his black and white pebbles - the hunter Gonpo Dorje- the story of Lopan Pawo; death and impermanence the story of King Mandhata; karma and rebirth; making the best use of one's human existence; the sufferings of samsara; the Three Jewels; teachers and holy beings; spiritual companions
4 Thirteen things to be abhorred
Giving up attachment to one's home country; giving up household distractions; practicing when one has the opportunity- Gonpo Dorje's meeting with Milarepa; pure perception; wealth, contentment, and the seven noble riches - the boy who offered seven peas; not being distracted by one's relatives; the importance of practicing while one has the chance; using one's wealth for the right purposes - the story of Anathapindaka- Milarepa's offering to Marpa; renunciation; keeping death in mind
5 Thirteen things that are very important
Realization, experiences, and compassion; the importance of the teacher; suitable disciples; giving up attachment; long-term vision- examples of Asanga and Ananda; devotion to the yidam and the Three Jewels - Songtsen Gampo, Lama Mipham; diligence; avoiding negative actions; dealing with discursive thoughts; compassion and bodhichitta; faith in the teachings; keeping one's vows and commitments; the unborn nature of the mind; secrecy in preserving the profound instructions

II DISCIPLINE
6 Ten facts with regard to timeliness in the practice
Taking advantage of the continued presence of the Buddha's doctrine; the exceptional chance of coming across the teachings; the chance of having the right qualities for practice; an exhortation to practice - don't listen to your relatives; generosity; dealing with difficulties in the practice; patience - the example of Jigme Lingpa- the rishi Patient Words; the point of practicing correctly; remembering death and countering attachment; demons - obstacles to practice
7 Thirteen instructions to put into practice
Remembering death as a spur to diligence - how precious the Dharma is - a king's offering in order to receive teaching; avoid seeing faults in the teacher - King Trisong Detsen's doubts; keeping harmony with other practitioners - practicing the teachings best suited to one - avoiding sectarianism; pleasing the teacher and avoiding upsetting him; keeping the precepts; the unborn nature of the ground-of-all; obstacles and distractions; the four boundless qualities; avoiding negative actions - mindfulness and vigilance; cultivating positive actions; understanding suffering - the value of hardships; diligence until enlightenment is reached; uniting the two accumulations
8 Five things that are useless
The importance of practicing correctly- renunciation, getting rid of attachment and desire, integrating the practice, devotion
9 Five things one needs to do
Devotion, merit, a fit mind, concentration, freedom from afflictive emotions
10 Five things that become lies
Making sure that you are following the genuine path- renunciation, refuge, meditation, the view, and understanding karma
11 Five things that are true
Buddhahood is up to you - King Trisong Detsen's daughter; the importance of the samaya and devotion - Gampopa's swineherd disciple, Jigme Gyalwai Nyugu's hunter disciple; combining skillful means and wisdom; uniting view and conduct; the nature of mind
12 Five things that are pointless
Wrong teachers; wrong disciples - Sunakshatra; samaya breakers; mixing positive and negative actions; knowing the teachings but not putting them into practice - Devadatta
13 Eight instructions
Diligence, forbearance, contentment, following a master of the profound teachings, courage, dealing with attachment and anger, maintaining the essential practice
14 Thirty-four pieces of advice
Avoiding distractions, preparing for death, the right conditions for practice, maintaining the correct view, diligence, renunciation, contentment, making offerings to the teacher and receiving his instructions, humility, mindfulness, confidence, avoiding hypocrisy, generosity, patience, hardship, avoiding obstacles
15 Six instructions for warding off defects
Metaphors for avoiding errors - Milarepa's mistake
16 Ten things that do no harm
The experienced practitioner's approach to different situations
17 Eighteen objects of derision
Eight things that help avoid mistakes in the practice; eighteen statements on how things can go wrong with one's faith, the teacher, the practice, one's experience, the view, and the result
18 Fifteen ways in which the practice goes wrong
With regard to the view, meditation, action, samaya, master, disciple, practice, experiences, result, instructions, human body, death, one's name, conceit, and one's final fate
19 Twenty-six kinds of folly
Metaphors for not practicing in the correct manner
20 Nine pieces of personal advice
How to put negative traits to good use
21 Nine pieces of heartfelt advice
Pith instructions on the essence of the practice
22 Five beatitudes
The blessings of being able to practice correctly
23 Twenty things that lead to breaches of samaya
Specific situations in which the Samaya gets broken

IV WISDOM
41 Twelve points that explain the view
An introduction to the ultimate nature of the mind
42 Twelve kinds of confidence confirming the view
Pith instructions on the nature of mind
43 Nine things one sees
An introduction to the absolute nature
44 Seven sublime things
Seven aspects of the sublime meditation
45 Six wisdom sense organs
How a realized yogi perceives
46 Six wisdom objects
The objects of a realized yogi's perceptions
47 Six authentic experiences
A realized yogi's experience of non-existence through his six senses
48 Six declarations on effortlessness
When the absolute nature is realized, there is nothing to adopt or reject
49 Sixteen metaphoric practices
Symbolic instructions on the practice of the Great Perfection
50 Five views
Transforming afflictive emotions without adoption or rejection
51 Ten aspects to complete confidence
How confidence in the natural state cannot be crushed
52 Four examples and their meanings
Examples of how the absolute nature permeates everything
53 Four dissolutions of extremes
Absolute truth, relative truth, and the four extremes
54 Four ultimates
The ultimate view, meditation, action, and experience and realization
55 Five dharmakaya aspects of the mind
Illustrations of the primal wisdom that is the nature of mind
56 Six primal wisdoms related to the mind
Six kinds of wisdom explained in the language of the Secret Mantrayana
57 Seven ways in which the nature of the mind is introduced
58 Six ways of introducing the ultimate nature of everything that arises
59 Eight introductions to the ultimate nature of things that appear
60 Nine ways of introducing the unborn nature
61 Four similes introducing the ultimate nature
lllustrations with conventional examples
62 Five instructions on the ultimate nature of appearances
63 Five experiences of wisdom
The view of the one absolute nature
64 Four ways in which the nondual absolute nature arises
65 Six ways in which the nondual absolute nature arises
66 Four ways of arising without duality
67 Four instructions on the indivisible absolute nature
68 Eight kinds of natural dissolution
How the objects of the six consciousnesses dissolve in the unborn absolute nature
69 Four things that are stainless
View, path, experience, and result
70 Five things one will not find
Object, mind, body, sentient beings, Buddha
71 Five instances where there is nothing to be found
Appearances, awareness, body, beings, Buddha
72 Five things to take as the path
73 Three aspects of emptiness
Phenomena, the mind, and the aggregates
74 Three things to take as the path
75 Four ties to be severed
76 Eight activities to be performed
Eight practices that prepare one for meditation; and three practices that help progress - meditating on the teacher, examining samsara, and reflecting on the six intermediate states
77 Seven concentrations
Concentrations uniting view and meditation
78 Six preparatory practices
79 Five branches in the main practice